Reza Abhari has been full professor of energy technologies and the Director of Laboratory for Energy Conversion (LEC) at ETH Zurich since 1999.

Prof. Abhari has published more than 200 research articles in peer refereed journals and conferences. Also, he has been a keynote speaker at many conferences worldwide. Among many other awards, he received the ASME R. Tom Sawyer Award for long-standing contributions to gas turbine science, technology and industry. He was the Christensen Fellow of St Catherine’s College, Oxford University in 2010.

Prof. Abhari is Co-Founder and previously Chair of the Global Power and Propulsion Society (GPPS), fellow of ASME and a member of the Swiss Academy of Engineering Sciences (SATW). He is a member of several internatinal and national research committees as well as a technical and strategic advisor to several multi-national corporations. 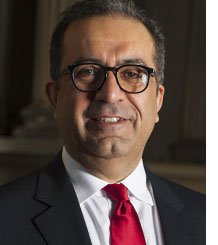