Maurice Dierick is a mechanical engineer, who started his professional career in 1991 with E. I. Du Pont de Nemours S.A. in France. He then moved to General Electric Plastics in Germany. Between 1998 and 2004, he supervised various projects in different businesses within the scope of the liberalization of the energy market.

From 2001 on, after the completion of the first phase of unbundling, he focused his attention on the structuring of asset management organization, first for Cap Gemini Ernst & Young in the Netherlands and as of 2004 as a consultant to various energy supply companies in Belgium, Germany, France, Switzerland and Australia. In Switzerland, he was also involved in market liberalization in 2008.

Maurice Dierick joined Swissgrid in February 2015. Since June 2016, he is a member of the Executive Board, initially as Head of Grid and since January 2019, as Head of Market. 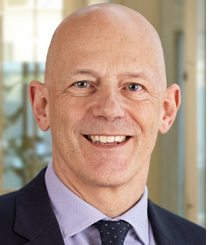